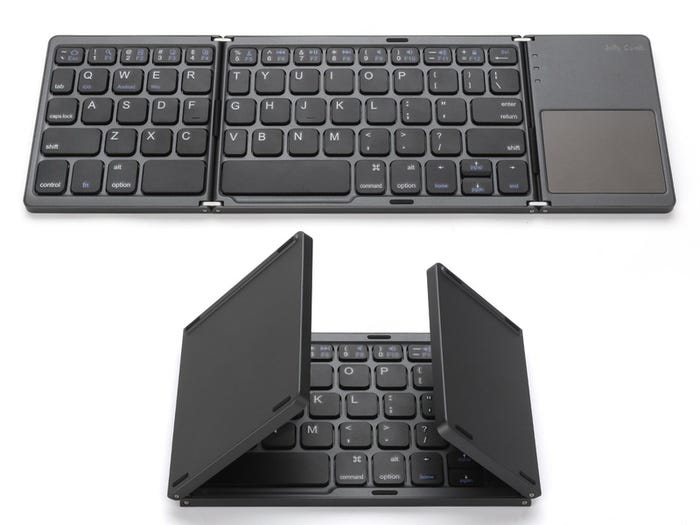 An Insider Picks reader recently asked me for help in solving an increasingly common problem: discomfort using the keyboard on Apple's latest laptops. To make its portables slimmer, Apple switched from using a keyboard with scissor-style switches to butterfly-switches, which have less key travel, but can also be less comfortable to use for some people.

To make the situation worse, the new keyboard style is also more prone to damage from dust or crumbs, requiring a not-so user-friendly fix. There's no way to change the physical keyboard on a MacBook or MacBook Pro, but there is a workaround if you don't mind carrying around an extra accessory: Jelly Comb's foldable bluetooth keyboard.

An Amazon exclusive, the nearly full-sized keyboard measures about 12 inches wide when open, but just under six inches wide when folded up. It has Chiclet-style keys similar to the keyboard on previous Apple laptops, and there's even a trackpad on the right-hand side, which you can use to move a mouse cursor on a computer.

While it does have a full keyboard layout, there is a design choice that may frustrate touch typists. To accommodate the left-hand fold, the R, F, and C keys are all stacked right on top of one another, instead of staggered a little bit like they would be on a single-piece keyboard. Similarly, the T and V keys are half-sized, which could take a little while to get used to.

If you can get over those two problems, though, this keyboard should solve your typing problems on Apple's current line of portables, and since it connects via Bluetooth , you could also use it with any PC, Mac, iOS, or Android device. That's great, since carrying around a regular full-sized keyboard to get work done on an iPad is unwieldy, unless you get a keyboard case.

Whether you're trying to figure out an elegant workaround for the biggest flaw with Apple's current laptops, or just want an easy, hyper-portable way to type on a physical keyboard on-the-go, Jelly Comb's foldable option is a good solution.

Read the original article on Insider Picks.
Follow on FacebookFollow on TwitterFollow on InstagramFollow on PinterestFollow on YouTube